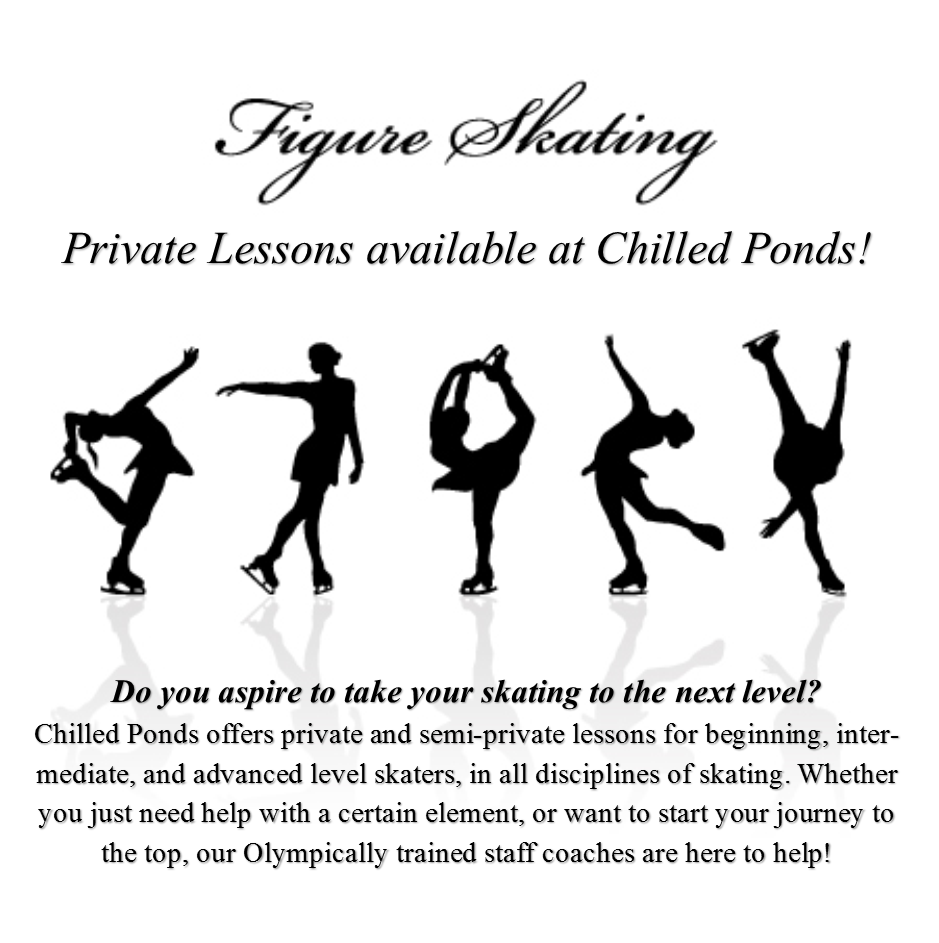 Contact our Skating Director, or any of our coaches below for more information, and to schedule private lessons for individuals or groups!

Jill has been the Skating Director at Chilled Ponds since November, 2015.

Originally from Northern NJ, Jill started skating at age 5 and achieved her Senior Freestyle Test, 7th Figure Test and Pre-Gold Ice Dances.  She turned professional when she went to college at Penn State University (earning a B.S. and M.A.) and taught there for 8 years prior to relocating to Hampton Roads in 1996.  She was the former Skating Director at Iceland as well as ARC IceSports (now Chilled Ponds).  Her students have competed at the Regional, Junior National and Adult National Levels and have earned USFS Senior Moves-in-the-Field and Senior Freestyle testing levels.

Jill is a Master-rated coach with the Professional Skaters Association in Moves-in-the-Field and Senior Rated in Freestyle and holds a Level 3 Coaching Ranking.  Jill also served on the PSA Board of Governors for 3 years and currently serves as an Area Representative for the PSA.  Jill also holds a position within US Figure Skating as a Membership Growth Consultant.

Jill is a member of the PSA and the USFS through the Tidewater Figure Skating Club.  Jill’s coaching specialty is in Moves-in-the-Field and on-ice and off-ice jumps and Theatre on Ice.

Originally from Marquette, Michigan, Mary Sue has been skating since the age of 4.  Her skating laurels include a Gold Medal in Ice Dancing and Junior levels in Figures and Freestyle.  She holds a BS in Business Administration from Northern Michigan University.  And, Mary Sue is also a realtor with Creed Realty in Virginia Beach.

Prior to relocating to Virginia, Mary Sue taught skating throughout the Midwest.  She has been on the Chilled Ponds coaching staff since 2006.  She is a member of the Professional Skaters Association and United States Figure Skating.

Her students have competed regionally and at invitational competitions.  They have passed skating tests that include Gold Ice Dances, Senior Moves and Junior Freestyle tests.

Yana began skating at the age of five in Moscow, Russia when her father took her to a frozen playground with a pair of strap-on blades.

Her skating journey began in earnest at the Skokie Skatium in Illinois, during group lessons, which eventually led to community ice shows and competing in Ice Skating Institute events. While a member of ISI, Yana passed her Pre-Alpha, Alpha, Beta, Delta, Gamma and Freestyle 1-5 tests.

After college, Yana switched to the US Figure Skating (USFS) track and began testing and competing as an adult. She has passed her Pre-Bronze, Bronze, and Silver Moves-in-the Field (MIF) and Freestyle (FS) tests, as well as her Pre-Preliminary MIF. She has competed in multiple competitions and earned a Silver medal at the 2014 USFS Adult National Championships competing at the Bronze level.

Allison is a US Figure Skating triple gold medalist and competed at the South Atlantic Regional Championships 6 times.  She has participated in Showcase, Light Entertainment, and Interpretive events, Theatre on Ice National Competitor (5th place in Senior Level), an Urban Pic Skate Finalist and has participated in the Quest for Creativity and Young Artist Show Case.

She's been skating for 18 years and it is her number one love and passion. She started skating in Chesapeake and trained her Intermediate-Senior level, and Theater On Ice in Fairfax, VA. She loves the performance and entertainment aspect of skating and wants to share it with the world. As a professional skater, she has worked for The Russian Circus on Ice, Rosstyn Ice Shows, Ice Creative Entertainment, Roncally On Ice, Holiday on Ice, and Disney On Ice.

She specializes in choreography, jumps, and the technical side of skating. She also trained in pair skating, Picskating, and trapeze and Yoga.

Bob began skating (hockey and figure) at age 5 and has continued to skate throughout his life.

Bob has been a member of the Tidewater Figure Skating Club, completing the USFS bronze levels in Freestyle, Moves in the Field and Ice Dance.  He was the Vice-President of the TFSC from 1999-2000.

Bob began coaching in 1999 and holds a certification as an ISI judge, judging local and regional competitions.  Many of his students have placed in the upper half of their levels in competition.  Currently, Bob’s passion is Synchronized Skating that allows skaters to work together in a team atmosphere.

Having trained with Stan Belliveau, a highly regarded boot and blade specialist in Long Island, Bob is also a professional skate mechanic and can assist with consulting, mounting blades, and sharpening.

Bob is also involved in the dramatic arts, teaching ballroom dancing and served as the dance director at Dance World, a local studio.  He has appeared on local and national television programs and commercials.

Cassie has been skating at Chilled Ponds for 15 years. She started in our learn to skate program and quickly realized how much she loved to skate and began taking private lessons.  Along with training at Chilled Ponds, Cassie has trained in Lake Placid, NY, and Fairfax, VA.  She passed her Senior moves in the field test and the supplemental senior gold for moves in the field. She still competes in the junior level test track event during regionals.

Outside of skating, Cassie graduated from Tidewater Community College with a degree in Social Science and a certificate in personal training and fitness and is now a full time student at Old Dominion University studying exercise science.  She also works part-time at the locally owned Surf Rider Restaurant.

Janice began skating at the Olympic Arena in Lake Placid, NY in 1974.  Her longtime private coach, Nicole Nardini, was a student of world renowned coaches Mr. Lussi and Howard Nicholson.  Janice tested through her Gold Figure, Senior Freestyle and Bronze Dance tests.  She competed at the North Atlantic Regionals up through Junior Ladies, as well as various local competitions which included winning a gold medal in Novice Ladies at the 1000 Islands Interclub Competition.

She performed as a soloist and in group numbers representing the Skating Club of Lake Placid in numerous annual ice shows.  She was a regular soloist in the Saturday night summer ice shows for many years and was chosen to skate in the dedication ceremony of the 1980 Olympic Arena.

During her amateur training, she skated 6 or more hours per day, as well as doing off-ice conditioning, Ballet and Modern Dance.  Janice also participated in other school sports such as gymnastics, tennis and track and field and played the Alto Sax for a few years.

She turned professional at the age of 19, due to injuries, so one of her main concerns as a coach is injury prevention.

She is Professional Skater Association (PSA) Certified Rated in Figures, Freestyle and Group instruction and has over 34 years of coaching experience. She teaches all levels of singles skating from Basic to Senior competitors, Moves in the Field and Off ice conditioning and Choreography.  She holds a Level 1 Ranking with PSA.  She is also a professional member of the Ice Sports Industry (ISI) and has a Silver Judges certification.

She has also trained for 17 years in Tai Chi.  She teaches the authentic Yeung Family Taiji Chuan 108 long form, Qigong breathing and Baduan jin exercises for relaxation, strengthening and rehabilitation from injuries.

Janice is an Army Spouse of 20 years, thankfully now retired!  During two of her husband’s duty stations overseas, Janice had the opportunity to coach along side top coaches in Czech Republic and Slovakia and helped train their international competitors.  She also began a skating school program for expats and their children and did fundraising for the Slovan Skating Club.

Other places she has coached include Iceland of Hampton Roads, North Carolina, Memphis and Nashville, TN and New York at Chelsea Piers and Ice House of New Jersey.

Her teaching philosophy is “To positively motivate skaters to achieve their full potential.”

Michelle Ouellette is a Canadian Figure skater who began skating at the age of 5. Both of her children participate in Figure Skating and Hockey, and so she is happy to volunteer her time to help out where needed. She completed her CFSA Gold Dance tests, Senior Silver Freeskate, 6th Figure and was certified to coach CanSkate and CanFigureSkate in the 1980s, as well as seminars to allow judging local skating competitions.

She was coached primarily by Jon Lane, Carol Lane, and Barbie Echlin, though she was fortunate to attend regular seminars from a variety of Olympians and World Champions in the Toronto area. Michelle has coached Figure Skating and Powerskating from beginner through Sr Silver.

Michelle also has Grade 8 practical and Grade 3 Theory Royal Conservatory Piano and several years of Jazz/modern dance training and has used these additional experiences to choreograph solo and group routines.